The "Yiwarra Kuju: Canning Stock Route" art exhibition formally opened on 5 February at ARTPLAY Design Centre. The exhibition was launched by the Australian Embassy in Russia in collaboration with the British Higher School of Art and Design.

The "Yiwarra Kuju: Canning Stock Route" art exhibition formally opened on 5 February at ARTPLAY Design Centre. The exhibition was launched by the Australian Embassy in Russia in collaboration with the British Higher School of Art and Design.

The display features replicas of paintings created by aborigines living in the desert in Western Australia. The bright, vivid works reflect the impact of the Canning Stock Route — the world’s longest cattle trail — on the lives of the indigenous people of that area. It was used in the first half of the 20th century for droving cattle through 1,850km of Western Australian desert from the Kimberley to the southern Goldfields region.

"The Canning Stock Route is a story that until now has been told mainly from a non-Aboriginal perspective. It became a frontier narrative about the making of Australia, but the voices of those who it impacted the most were often absent. For the region’s Aboriginal people, the stock route cut through lands already full of story and rich in culture and history. Their story is told in the exhibition", said Ms Melissa O’Rourke, Australia’s Chargé d’Affaires for the Australian Embassy in Moscow. 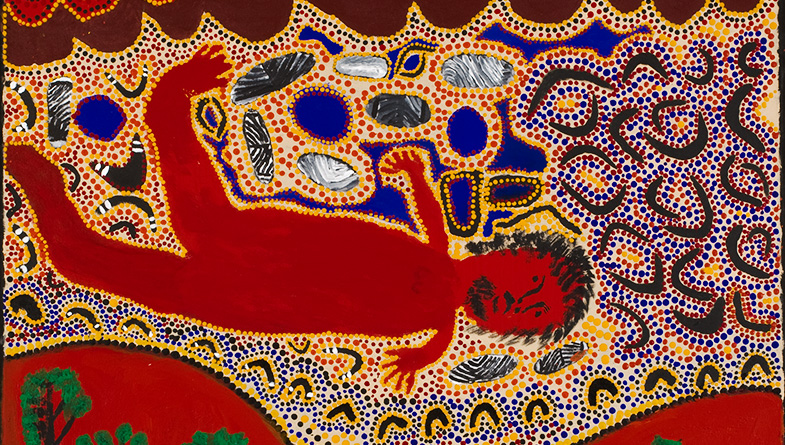 Blog All news
11.01.2021 | News
The World Brand Design Society has given the British Higher School of Art and Design the title of WBDS Design Education Institution of the Year
17.12.2020 | News
A collaborative project of Foundation Art & Design students and Manchester School of Art students was presented at an exhibition in Shanghai
24.11.2020 | News
BA (Hons) Interior & Architecture Design students won the 3rd place in the Brick competition in the nomination "Brick public space"
01.10.2020 | News
Garments from degree collections of BA (Hons) Fashion Design graduates were chosen for Tsvetnoy Central Market’s new campaign
15.07.2020 | News
The future starts now: BA (Hons) Fashion Design students take part in the creative upcycling project with H&M and “ELLE Russia”
AUSTRALIAN EMBASSY OPENS EXHIBITION OF ABORIGINAL ART
We use cookies developed by our specialists and third parties, to analyze the events on our website, which allows us to improve interaction with users and service. Continuing to view the pages of our site, you accept the terms of its use. For more information, see our Privacy Policy.